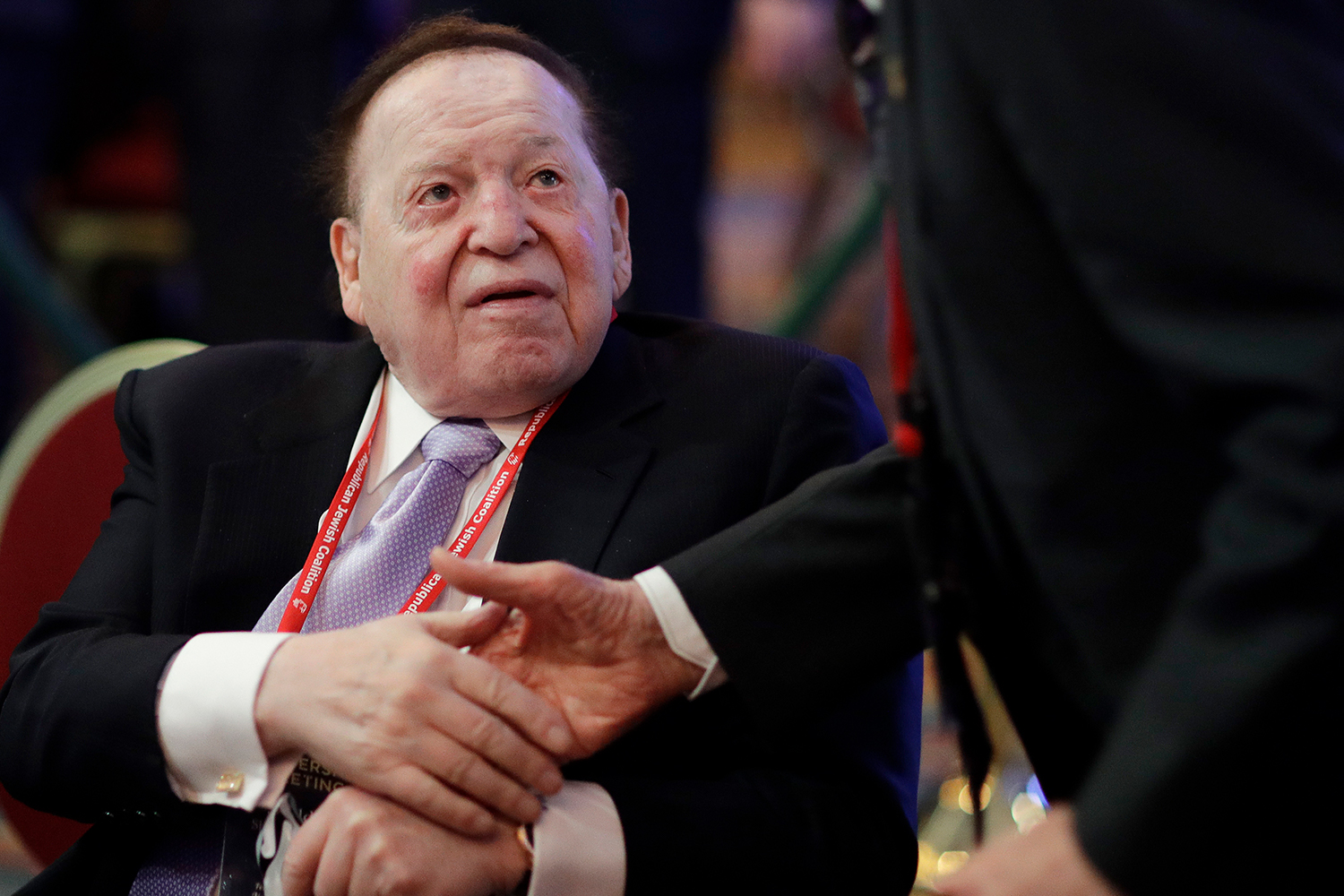 When President Donald Trump connected by phone last week with Republican mega-donor Sheldon Adelson — perhaps the only person in the party who can cut a nine-figure check to aid his reelection — the phone call unexpectedly turned contentious.

The 87-year-old casino mogul had reached out to Trump to talk about the coronavirus relief bill and the economy. But then Trump brought the conversation around to the campaign and confronted Adelson about why he wasn’t doing more to bolster his reelection, according to three people with direct knowledge of the call. One of the people said it was apparent the president had no idea how much Adelson, who’s donated tens of millions of dollars to pro-Trump efforts over the years, had helped him. Adelson chose not to come back at Trump.

When word of the call circulated afterward, Republican Party officials grew alarmed the president had antagonized one of his biggest benefactors at a precarious moment in his campaign. They rushed to smooth things over with him, but the damage may have been done.

Adelson’s allies say it’s unclear whether the episode will dissuade the Las Vegas mogul — long regarded as a financial linchpin for Trump’s reelection — from helping the president down the home stretch.

The White House did not respond to a request for comment.

The president needs the money. With less than three months until the election, he is overwhelmed by a flood of liberal super PAC spending that his party has failed to match. Since this spring, outside groups supporting Joe Biden have outspent their pro-Trump counterparts nearly 3-to-1, an influx that’s helped to erase the president’s longstanding financial advantage.

Now, Republican leaders are pleading to billionaires for help. Trump advisers are pining for new outside groups to form, and the White House is growing anxious to see what Adelson, who has pumped hundreds of millions of dollars into Republican super PACs over the past decade, will do.

“It’s important that the word get out to donors that we need the super PACs and we need them to step up to the plate,” said Club for Growth President David McIntosh, whose group is poised to launch a $5 million TV campaign next week. “There hasn’t been the urgency on the super PAC side. But now we’re seeing that you’ve got to take care of that, too.”

The avalanche of spending on the left isn’t expected to end anytime soon. Pro-Biden groups have reserved over $70 million on the TV airwaves between now and the election, while Trump-allied groups have booked just $42 million, according to the media tracking firm Advertising Analytics. 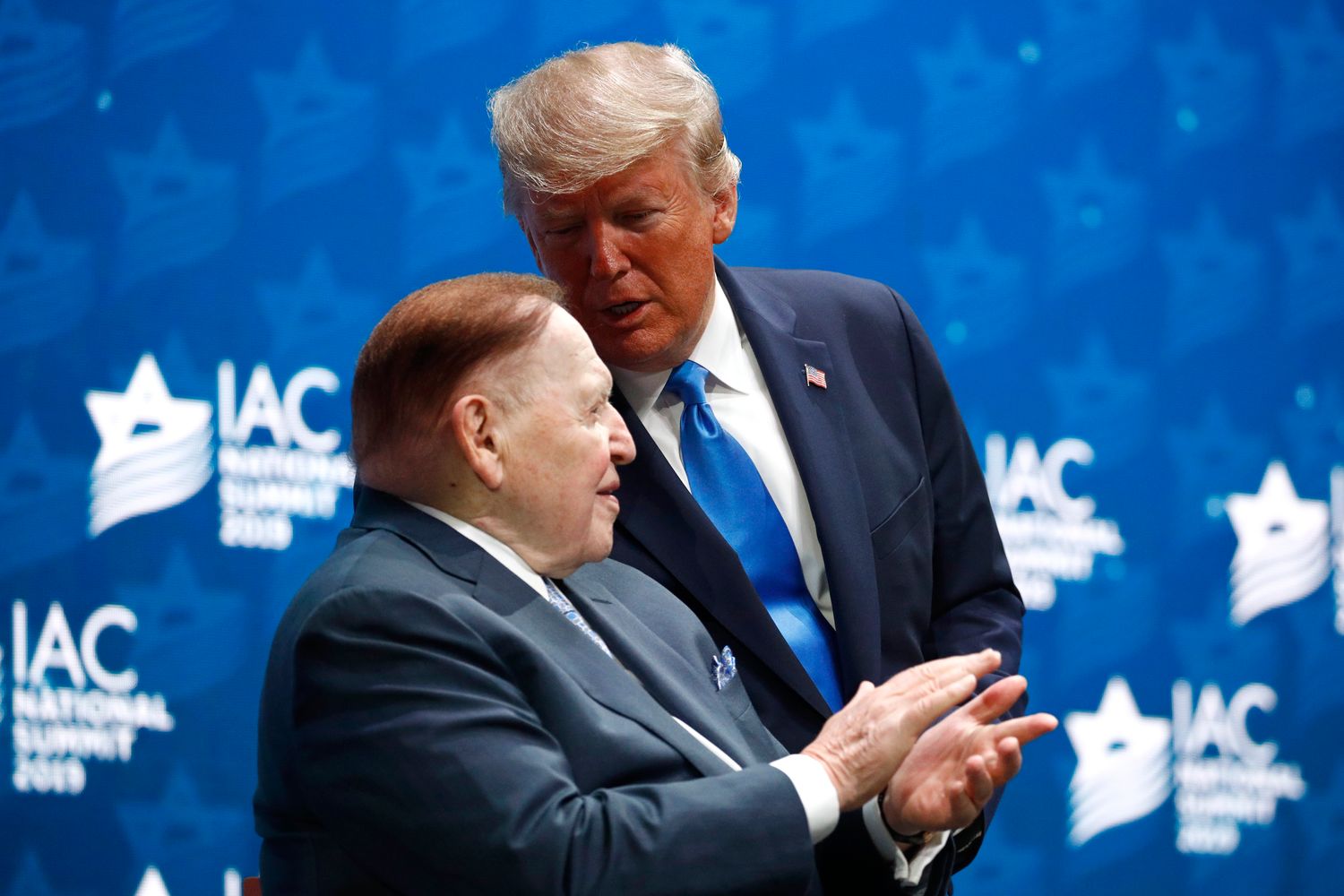 The Trump-blessed America First Action has been outraised and outspent by the leading pro-Biden Super PAC Priorities USA, which has been running an array of blistering commercials hitting Trump over his response to the coronavirus pandemic.

Republicans point to an array of reasons for America First’s struggles. Some of the president’s aides point out that, much to their frustration, he has shown less interest in super PAC fundraising than Barack Obama did ahead of his successful 2012 reelection. He’s also shown a reluctance to do the kind of glad-handing, cold-calling, and grooming of billionaires needed to cultivate a well-funded super PAC.

Others say big Republican givers are holding back checks because of the potential business fallout of being a major Trump contributor. After word surfaced that fitness company executive Stephen Ross was hosting a Hamptons fundraiser for Trump, patrons at his Equinox and SoulCycle chains staged a boycott.

With Trump trailing badly, some donors are more interested in bankrolling efforts to save the GOP’s Senate majority. Among the contributors who’ve cut checks to the super PAC for Senate Republicans but not Trump’s are hedge fund manager Paul Singer, investor Charles Schwab, and real estate developer Mel Sembler.

Others say there is simply exhaustion with Trump and disgust at his handling of the coronavirus pandemic.

Dan Eberhart, a Republican donor who has contributed to America First Action, pointed to what he described as an “enthusiasm gap among super PAC donors.”

“We are getting clobbered,” he said. “The left-leaning super PACs are bringing a lot more air support to team Biden than the ones on the right are bringing to team Trump, unfortunately.”

The president’s advisers blame America First for its struggles. They point to its decision to wait until spring to take on Biden and to its $4 million investment on a TV commercial that spotlighted Vice President Mike Pence but made no mention of Trump. The move infuriated the president’s advisers; on the morning the commercial was launched, a Trump adviser reached out to a POLITICO reporter unprompted to blast the move.

America First Action President Brian Walsh said the organization’s nonprofit arm had chosen to feature Pence to highlight remarks he had made at an event it had hosted focused on the economic recovery.

While America First Action has the White House’s imprimatur, ongoing concerns about the group have triggered conversations about whether an alternative super PAC should form. While Adelson is unlikely to donate to America First Action, allies say, he is open to funding another pro-Trump outfit.

But some Republicans say that having multiple super PACs could cause confusion among donors about which outfit to support.

Christopher Ekstrom, a Dallas investor who backed Ted Cruz’s 2016 primary campaign, recalled that the Texas senator had an array of super PACs. Some potential givers, he recalled, wound up not giving to any of them.

“Team Trump was wise to centralize their super PAC after his victory and prevent their super PAC from being Balkanized,” said Ekstrom, who has given over $20,000 to pro-Trump causes this election cycle.

Republicans are confronting an array of liberal groups, ranging from Priorities USA to American Bridge to Future Forward, all of which have booked millions of dollars in TV spending. Even as Biden has struggled to keep pace with Trump on the fundraising front, there are concerns in Republican circles that the liberal organizations could do damage to the president.

Republican strategist Ken Spain noted that “neither candidate will lose because of lack of resources at this point,” but added: “The Democratic donor class has coalesced and built a rival apparatus to that of the Trump campaign and its allies.”

With both sides flush with cash, there will be no shortage of TV commercials from either side. Alex Castellanos, a veteran Republican ad maker who helped to steer a pro-Trump super PAC in 2016, said voters would be more focused on the individual performances of Trump and Biden.

“The most powerful media driver in a presidential [campaign] is the candidate. The candidate makes news and drives the agenda. That’s the good news for Donald Trump,” Castellanos said. “Sometimes, that’s the bad news for Trump, too.”