Europe’s two rotorcraft manufacturers must come together to develop a next-generation military helicopter or run the risk of losing out to their rivals, an Airbus Helicopters executive has warned.

Europe’s two rotorcraft manufacturers must come together to develop a next-generation military helicopter or run the risk of losing out to their rivals, an Airbus Helicopters executive has warned.

Jerome Combe, head of product policy and strategy at the airframer, told the Royal Aeronautical Society’s Next-Generation Rotorcraft Conference that it would be undesirable to have two major European helicopter manufacturers “competing in a shrinking military market”. 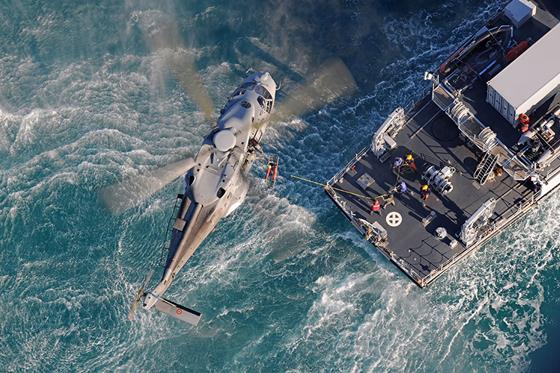 “Without co-operation we take the risk of not reaching critical mass” to achieve a return on the substantial investment required to bring a new aircraft to market, he says.

Those four countries, plus Greece, are involved in a NATO push to design and develop a future medium-class helicopter – with a maximum take-off weight of 8-15t – to enter service in 2035 under the organisation’s Next Generation Rotorcraft Capability effort. That sees a requirement to replace around 1,000 medium-lift helicopters in the period from 2030-2040.

But Combe says there is also potential to join forces under a similarly titled effort Airbus has proposed to the European Defence Fund.

Combe is hopeful that this proposal can coalesce into an “identified” programme along the lines of the four-country EuroMALE unmanned air vehicle initiative.

He says support for the rotorcraft initiative has already been voiced by all three of its home nations: France, Germany and Spain.

“We would definitely be stronger towards Europe if we were going hand and in hand with Leonardo. We hope this will be the case in the future.”

Discussions between the pair are already under way, says Combe, and he is positive that an agreement on a future direction can be reached.

He notes that both companies are separately developing high-speed civil platforms – Racer and the Next-Generation Civil Tiltrotor, respectively – under the EU’s Clean Sky 2 programme.

These could be used to perform flight demonstrations for military customers to assess the suitability of their architectures for a range of missions, he says.

And while the Racer will be a smaller aircraft than that outlined by NATO, Combe says that Airbus modelled a similar compound architecture for its now abandoned X6 programme for a helicopter of up to 16t.

“When we explored the architecture for a heavier aircraft there was no blocking in terms of the design,” he says. 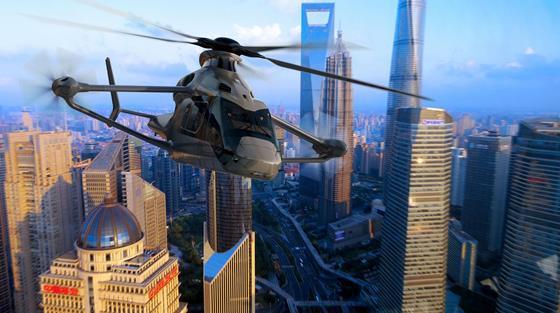 Airbus Helicopters and Leonardo have previously collaborated through NH Industries – alongside Fokker – on the NH90 programme.

While Italy and the UK are part of NATO’s NGRC process, both countries have also expressed an interest in the USA’s Future Vertical Lift (FVL) programme.

Should one or the other decide to leave the NATO effort, that could also throw Leonardo’s continued participation into doubt.

However, Combe says this will depend on whether FVL is “a competitor or complementary asset” to NGRC.

That will ultimately depend on the requirements outlined by NATO, particularly those around speed, range and endurance, says Steve Allen, head of strategy at Leonardo’s UK helicopter unit.

“A discussion around vehicle architecture is fundamental from an early stage,” he says.

In addition, choosing a non-US product may be driven by concerns around consideration needs to be given to sovereign capability, freedom of action and industrial strategy, he adds.

The NGRC group should begin to clarify some of these issues later this year, when it conducts planned engagement with industry.

Allen also notes that while the 2035 timeframe is achievable, veterans of previous development programmes would consider it a “sporty timeline”.

Although FVL presents an obvious threat to military sales, Combe stresses that the technological development driven by the programme will also lead to increased competition in the civil market.

US helicopter manufacturers are benefiting from huge planned investments under FVL – a combined total of around $5 billion for the two programmes of record for new assault and scout helicopters.

Even if a proposed design is not selected, the research and development investment already received will be applied to a manufacturer’s civil range, he says.

“We need to be very aware and awake of the threat that is arising for the European industry. At the end of the day, I think the future of the rotorcraft industry in Europe depends on successful military programmes. Without that, I think we will lose,” he says.

“The US won’t give critical technologies to its European competitors.”

The Porsche 914 was a mid-engine, lightweight “momentum car” if there ever was one. At just a hair over 2,000 pounds in its most common guise, the late-60s and ’70s Porsche was powered by a flat-four Volkswagen engine that made an uneventful 79 to 99 horsepower. Despite this, the 914 is still craved by enthusiasts today, and now, there’s a new variant coming out. Sort of.

No, Porsche isn’t making a modern version of the 914, but we are getting the next best thing: a sharp-looking, high-performance restomod from Fifteen Eleven Design, a reputable U.K.-based company that has plenty of experience making old cars drive like new. With past projects including a Pre-War Aston Martin Racer, a 1961 Maserati 3500 GT, and a 1966 4.2-liter E-Type Jag, the company certainly knows its way around restorations and redesigns. Although renderings are the only thing Fifteen Eleven has to show for this new project so far, they look great and promising.

Per the images we see here, the restomod will get a number of aesthetic changes, including stylish new LED headlights doubtlessly inspired by modern Porsches, updated foglights with DRL rings surrounding the more powerful LED beams, and an active rear ducktail spoiler that can raise or lower depending on the vehicle’s speed. Along with this revised front fascia and hood, the wheel arches have been stretched out to accommodate larger wheels and wider tires.

More importantly, gone is the sub-100-horsepower VW engine, instead replaced with a proper, 291-horsepower 3.4-liter flat-six from the first-generation Porsche Cayman S. Combine that with the extremely lightweight 914 platform, and this thing is certain to be a hoot on the road. Oh, and power will be sent to the rear wheels through a six-speed manual transmission, as it is in the Cayman S.

The suspension and braking systems will also come directly from the Porsche factory catalog, per Fifteen Eleven Design, meaning that it will also handle much better than the original.

Furthermore, don’t think this rendering is just a go-nowhere digital art project. Although official pricing is yet to be released, the managing director of Fifteen Eleven Design, Chris Mellors, told Autocar that “All too often, we hear of graphic renders being produced with no intention of being built. But here at Fifteen Eleven Design, all our efforts are put into making sure any concepts are carried through to completion.”

Unfortunately, seeing as Fifteen Eleven doesn’t operate in the U.S., it’s unlikely these sweet 914 restomods will ever make it to American soil. So, like many other cool machines, we’ll just have to enjoy them from a distance.

Got a tip? Send us a note: tips@thedrive.com

In general, Merkel said that “there is simply a much broader political overlap with President Biden” than with predecessor Donald Trump.

New York Times opinion writer Will Wilkinson raised red flags on social media after appearing to call for Mike Pence to be lynched. He is now claiming the “error in judgement” was just “sharp sarcasm.”

In Wednesday-evening tweets responding to criticism of President Joe Biden from conservatives, Wilkinson wrote, “‘Aha! Biden proposes policies I dislike. HIS CALL FOR UNITY IS A LIE!’ is all the forlorn conservative mind can seem to muster. Sad.”

The tweets were deleted, though screenshots still did the rounds on Twitter. Yet Wilkinson’s account received no action from the social media giant, despite what many interpreted as a call for violence. The platform previously suspended Donald Trump’s account in the wake of the US Capitol riot, claiming his tweets could be interpreted as calls for violence.

Critics called for Wilkinson to face suspension similarly, after his “lynch” comment.

@jack and this is somehow okay?

Hi @willwilkinson! Why did you call for former Vice President Mike Pence to be lynched?@nytimes,@katiekings, any comment on your “contributing opinion writer” calling for violence against a public official?@TwitterSafety & @SecretService should know pic.twitter.com/xiDjMQ5mvS

Wilkinson apologized in a lengthy thread on Thursday, calling his tweet “sharp sarcasm” and an “error in judgement,” and claiming he was not calling for violence, as many had accused him of doing.

“Last night I made an error of judgment and tweeted this. It was sharp sarcasm, but looked like a call for violence. That’s always wrong, even as a joke. It was especially wrong at a moment when unity and peace are so critical. I’m deeply sorry and vow not to repeat the mistake,” the writer tweeted.

In follow-up messages, Wilkinson turned his attention to conservatives and blasted Biden’s “right-wing critics” for accusing the president of “insincerity” in his repeated calls for unity.

“My ill-advised tweet was meant as a tart way to drive home the exasperating bad faith of those whose own divisive rhetoric and repetition of lies about election fraud facilitated the mob attack on the Capitol, where pro-Trump rioters built a noose and called for Pence’s head,” he tweeted.

My ill-advised tweet was meant as a tart way to drive home the exasperating bad faith of those whose own divisive rhetoric and repetition of lies about election fraud facilitated the mob attack on the Capitol, where pro-Trump rioters built a noose and called for Pence’s head.

He argued his “lynch” tweet was meant to highlight the right’s unwillingness to go along with “national unification.”

According to Wilkinson, given the fact that some violent protesters at the Capitol reportedly wanted to kidnap Pence, “there can be no national unification except on right-wing terms.” This suggests the “absurd conclusion” that, “if Biden really took unity seriously, he’d endorse the mob violence of January 6,” he wrote.

If right-wing demands led to calls to kill the vice president, but there can be no national unification except on right-wing terms, that suggests the COMPLETELY ABSURD conclusion that if Biden really took unity seriously, he’d endorse the mob violence of January 6.

As well as contributing to the New York Times, Wilkinson is the vice president of policy at the Niskanen Center. A think tank that has called for Trump to be “convicted” by the Senate and barred from holding future political office, it has argued that members of Congress “who vouched for the president’s lies about election fraud must also be sanctioned for their role.”

WASHINGTON — US President Joe Biden launched a national strategy to curb the raging coronavirus pandemic on his first full day in office on Thursday.Biden’s strategy aims to restore trust in the